Minister Brabec represents Czech Republic at climate roundtable with US 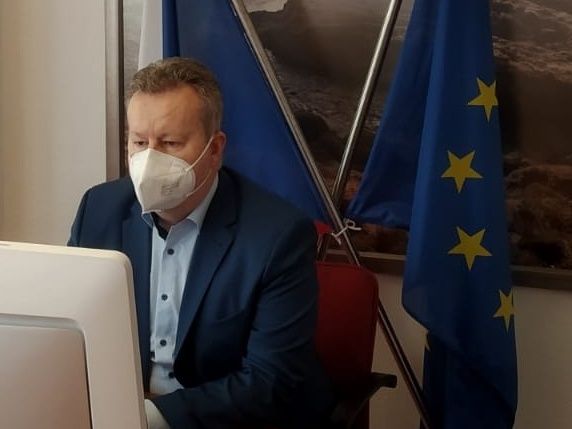 US President Joe Biden’s two-day online Leaders’ Summit on Climate included closed sessions. On Wednesday 21 April 2021, 48 countries from around the world met John Kerry, the Special Envoy for Climate Action, at one of these discussions, where the Czech Republic was represented by environment minister Richard Brabec.

US President Joe Biden fittingly chose Earth Day to convene the two-day Leaders’ Summit on Climate, aimed at mobilising nations to take more substantial action on climate protection. In Europe, Denmark, France, Italy, Germany, Poland, Spain, the UK and EU officials received invitations. Other countries invited to meet the new US President included Australia, Brazil, Canada, China, India, Israel, Japan, South Korea, Mexico, Russia, the United Arab Emirates, and Turkey. Each country’s representatives were expected to report on what measures they plan to take in this regard. The summit included separate private roundtables where the President’s Special Envoy for Climate Action, John Kerry, held talks with ministers responsible for the efforts their countries are making to strengthen their climate ambitions. Countries whose representatives were not invited to the Leaders’ Summit itself, such as Belgium, Croatia, Hungary, Slovakia, Slovenia, Lithuania, Iceland, Armenia and New Zealand, were invited to the roundtable discussions. Together with the Czech Republic, 48 other countries besides the US were at the roundtable talks. The results of these roundtables will also be reflected in the outcomes of the Leaders’ Summit.

During the talks, Minister Brabec presented the Czech Republic’s climate plans and highlighted the progress it had made so far in this area. Between 1990 and 2019, greenhouse gas emissions in the Czech Republic decreased by 38%. In line with the EU’s newly adopted target to cut emissions by at least 55% by 2030 and to achieve climate neutrality in the EU by 2050, the Czech Republic has already started working on an update of its long-term climate strategy (the Czech Climate Protection Policy), which – following a review of the country’s commitments under the Paris Agreement – could be completed by the end of 2023. Minister Brabec also informed Special Envoy Kerry and the participating countries about the decarbonisation of the Czech energy sector, the planned shift away from coal in 2038 or earlier, subsidy programmes, adaptation measures, and bark beetle outbreaks in the Czech Republic.

“In the coming years, massive emission abatement investments in the energy sector, industry, transport and households await us in a task that is not just for the Ministry of the Environment. In the last year, interest in clean technology investments has been enormous among businesses of all sizes, as well as municipalities, regions, and households. Specific companies, regions and cities are already declaring carbon neutrality or coal phase-out targets for 2030. There is particularly huge interest in investments in renewable energy sources with the help of the Modernisation Fund. Czech households are also engaging in reconstruction and renovation projects as they seek to harness energy savings and the greening of heating. The Coal Commission has proposed that the Czech Republic put an end to coal within 17 years, and I personally think that this will happen sooner. Achieving the ambitious targets we have committed to will undoubtedly prove difficult, as we are now facing an unprecedented bark beetle outbreak that has temporarily and paradoxically turned forests, which are supposed to sequester carbon, into emitters," added Minister Brabec, while calling on other countries to step up their climate efforts in view of the upcoming United Nations Conference (COP26) in Glasgow.

Since taking office, President Biden has made the fight against climate change a key issue in US foreign policy and national security. On his first day in office, he signed the country’s re-accession to the Paris Agreement. At the summit, President Biden plans to announce an ambitious US national contribution to cutting greenhouse gas emissions by 2030. The White House said the summit is intended to bring home the urgency and economic benefits of stronger climate action and will be a key milestone on the way to November’s COP26 climate conference in Glasgow.