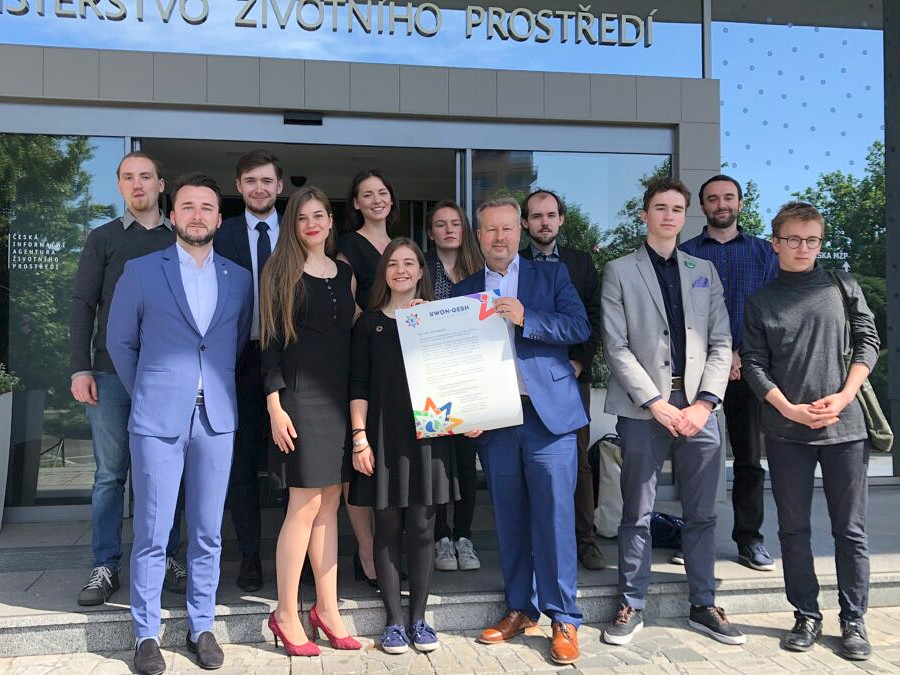 By signing the Kwon-Gesh Pledge the Minister of the Environment Richard Brabec confirmed the Czech Republic's commitment to meaningfully involve the young people in the implementation of the national climate policy. The so-called Climate Promise to the Youth (Kwon-Gesh Pledge) was signed in the presence of the representatives of Fridays for Future, Universities for Climate, the Student Chamber of the Council of Higher Education Institutions, the Czech High School Students Union and the Association for International Affairs. These organizations are requesting consistent action on climate change and education. Representatives of the mentioned organizations and the MoE were invited to the Round Table by the organization Youth, Speak Up! (YSU). YSU´s goal is to arouse young people's interest. YSU also brings topics relevant for the young generation to the Chamber of Deputies.

Kwon-Gesh Pledge is currently the most accurate formulation of how young people should be involved in the national climate policy. The promise (which is an initiative of the Permanent Mission of Ireland and the Marshall Islands to the United Nations) is a complement to the Paris Agreement, as it proposes actions for its joint and intergenerational fulfilment. The impulse for creating such a pledge was the fact that the involvement of the young generation was not considered in the Paris Agreement. "Climate change is a key issue that spans across the generations. That is why youth representatives need to have the opportunity to speak about climate issues and to be heard," said Minister Richard Brabec.

The aim of adopting the Kwon-Gesh Pledge is to make climate policy accessible to young people. "On the one hand, the promise will enable young people to be involved in decision-making processes. On the other hand, it will present the sub-topics of climate change to the whole society. It is a response to the growing interest of our generation in tackling the climate change,” said the UN Young Delegate Barbora Kvasničková, who introduced the document in the Chamber of Deputies.

Kwon-Gesh Pledge is the main output of the first UN Youth Climate Summit, which took place in September 2019 in New York. Thanks to the joint efforts the UN Young Delegates succeeded in enforcing the Kwon-Gesh Pledge in the UN Resolution on the Youth during the 74th General Assembly. Since then, more than 70 countries have committed to involving young people in their national climate policies, including Slovakia, Austria, and Germany. In Ireland, an independent Youth Climate Council has been set up to develop specific requirements and communicate them directly to the government.

“Youth, Speak Up! also aims at those young people, who are fighting for more consistent action on climate change issues taken by the government. YSU also hopes to become a platform for cooperation with scientists and other supportive organizations on formulating the specific requirements that are suitable to be presented to the government. The MoE and the involved organizations are welcoming the joint approach to the discussion. At the same time, it is a proven model in which four working groups already operate under the auspices of the YSU in the Chamber of Deputies," said Hana Fořtová, who leads the YSU working group focused on ecology. "There is quite a frustration among young people, as they do not feel sufficiently represented when it comes to tackling climate change. That is why Youth, Speak Up! is trying to open the door for them to the Parliament and to the Ministries. It is important to get the generations Y and Z involved in the debate about their future," adds the founder of YSU, Jana Soukupová.

"I would only talk about success after the voices and interests of young people, who call for a stable and sustainable future, are heard. Efforts to prevent a climate crisis and to achieve carbon neutrality require far-reaching changes in the functioning of our society. Climate policy needs to be shaped by a broad democratic debate, in which all those affected must be involved. We are therefore pleased that Minister Brabec has joined Kwon-Gesh Pledge, and we hope that the involvement of young people in decision-making processes will not only remain on paper, but it will become a common practice. Moreover, climate policy is no longer just a question of the Ministry of the Environment, so I hope that the principles contained in this document will be applied even by other politicians," commented Petr Doubravský, spokesman for the Fridays For Future high school movement.

"We welcome the signing of the climate promise to young people as a helpful step to involve the young people from the Z generation in deciding our future. But as always, it is necessary to act rather than talk. The Czech High School Students Union supports the Fridays for Future movement, which enables young people to participate in efforts to stop global warming and climate change. In the long run, we also see the need to devote sufficient space in the education to the issue of climate change, its consequences, and the possible solutions," says Ondřej Nováček, 1st Vice-Chairman of the Czech High School Union.

Young organizations agreed that the signing of the Climate Promise is a positive step. But it is necessary to focus on the fulfilment of the specific goals aimed at preventing the negative effects of climate change.