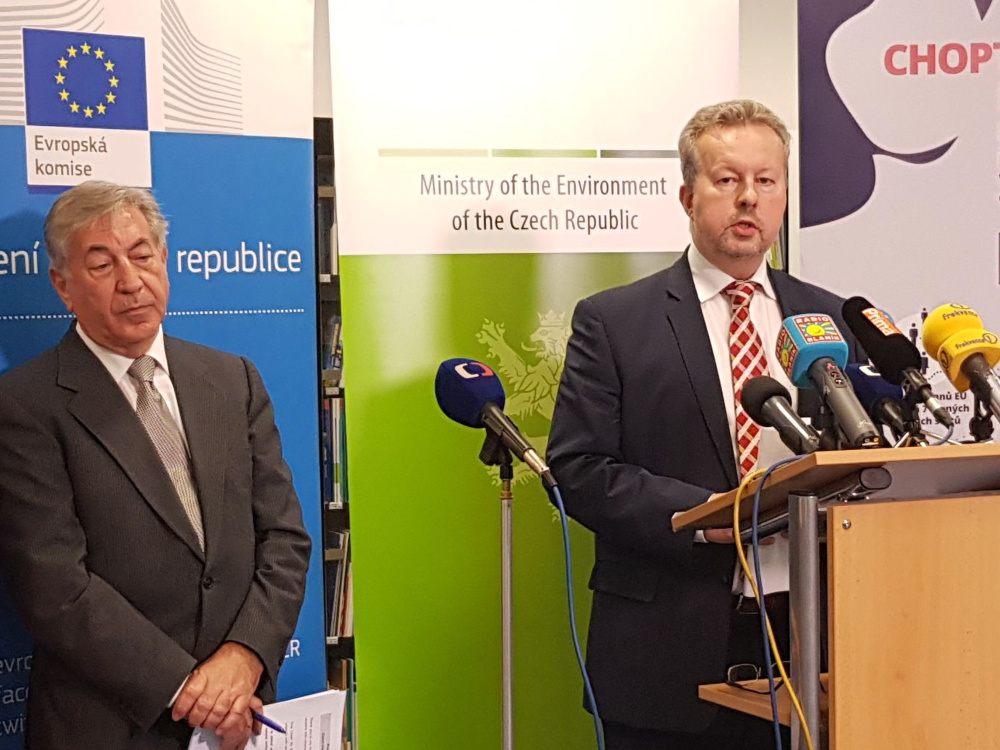 Air quality in the Czech Republic is still unsatisfactory. Although in 2017 the decreasing trend of emissions continued and selected emissions of pollutants decreased year-on-year (the largest decline was in dust emissions by 3.8%, NOx emissions by 2.9% and SO2 emissions by 2.5%), we are still failing to comply with the EU air quality limit values​​[2]. They are what defines air quality. The largest share in air pollution continues to be represented by local heating in homes, in some regions it is industry and in larger cities it is mainly transport. An important factor affecting air quality in the Czech Republic is also cross-border transport of harmful substances, which is the main source of air pollution in some areas (especially in border regions).

According to recent analyses, however, the cross-border transport of pollution contributes significantly to pollution levels throughout the country. An absolutely crucial factor with a resulting impact on air quality is the meteorological situation which was strongly influenced by an extensive anticyclone at the beginning of last year. That influenced the dispersion conditions in the Czech Republic and throughout Central Europe almost continuously for two months. It is the weather that largely affects the number of smog situations and thus the deterioration of air quality in the form of higher concentrations of harmful substances in the breathing zone of humans, and hinders the effects achieved by emission reduction in the country. Data from 2018 do not indicate a similar deterioration so far and therefore we can expect a return to the previous trend of improving air quality. The Ministry of Environment invests in improving air quality large sums of money both from national sources and from European funds, as well as continuously responds to the current needs by amendments to laws. In the last few years, some legislative changes became effective, such as the introduction of regular inspections of the technical condition and operation of boilers in homes, a ban on the sale of boilers of emission class 1 and 2 from 2014 and marketing of boilers of emission class 3 from 2018, a change in the Act on Environmental Impact Assessment, intended to simplify the process and so speed up e.g. the construction of by-pass roads of towns, also from this year on, more stringent emission limits apply to all smaller heat and power plants burning solid fuels.

From September of this year, thanks to an amendment to the Air Protection Act, municipalities may prohibit on their territory the use of solid-fuels boilers of emission class 1 and 2 for heating, i.e. even before the operation of such boilers is banned nationally in September 2022. Since last year, municipalities also have the option to check directly in the households, whether the heating with solid fuels complies with the conditions of the Air Protection Act, e.g. whether the coal meets the required quality, whether the mandatory inspection of the boiler was made, or whether households do not burn banned materials whose combustion leads to high releases of pollutants into the air. In this year's heating season, 330 inspections were made, out of which in about a quarter of the cases a violation of the law was proven.

Changes are taking place also in transport. From October this year, thanks to cooperation between the Ministry of the Environment and the Ministry of Transport, stricter rules apply to inspections of cars with diesel engines. The obsolete value of so-called opacity which no longer reflects the technological developments in the field of automobile production, has been reduced to a level that detects a nonfunctional filter of particulate matter (from 0.5 to 0.25 m-1).

In practice, this means that a vehicle with damaged, dysfunctional or a removed filter will be more easily detected directly in operation and will have to be repaired within 30 days or decommissioned. Thanks to amendments of relevant regulations governed by the Ministry of Transport, the Czech Police obtained the relevant competencies to check the state of the diesel particulate filters more effectively directly on the road.

Last but not least, the protection of the environment is enhanced also by this year’s amendment to the Act on the conditions of traffic on roads. From April next year, special registration plates will be given free of charge to electric vehicles and hydrogen-powered vehicles. Thanks to the new number plates and thanks to their differentiation from conventional cars, it will be possible to introduce in cities e.g. special traffic lanes or parking spaces for these types of cars in order to enhance the diffusion of these zero-emission vehicles.

In terms of legislation, Minister Brabec and MoE representatives voiced several requirements towards the European Commission during the two-day meeting on air quality and protection, that need to be addressed jointly on European soil, according to the Czech Republic. In the field of transport, it is necessary to raise the issue of stricter European legislation for regular checks in the vehicle emission measuring stations. Indeed, European legislation is very strict in approving vehicles for marketing, but is completely outdated and insufficient in the area of regular checks. In terms of ​​cross-border transport of pollution, opinions were voiced during the meeting that without active support of the European Commission in reducing pollution transport it will be difficult, if not impossible, in some border areas to achieve the limit values. "Another problem that we have identified through our experience is inadequate legislation and market surveillance in the area of ​​standardization of boilers. It cannot be allowed that some eco-designed boilers pass certification in one test room and not in another. That threatens the success of the boiler replacement programmes not only in the Czech Republic but also in other countries," Minister Brabec pointed out to the Commission. Commissioner Vella promised in Prague that the European Commission will pursue these issues.

According to Environment Minister Brabec, the legislative changes and regulations must, however, go hand in hand with positive incentives to behave responsibly towards the air or to facilitate the transition to clean technologies, both in transport and in heating and power generation in households.

In the transport sector and the transition to alternative sources, the state continuously finances many projects on renewal of vehicle fleets. In 2016, towns and villages bought 184 new alternative-fuel buses and trams for nearly CZK 3 billion. Additional funds for the conversion of fleets of transport companies are intensively negotiated at the European Commission.

Since 2014, entrepreneurs have received nearly CZK 250 mil. for the purchase of electric vehicles and charging points. For that money, they bought nearly 700 electric vehicles and built 324 charging points. From the MoE funds, municipalities bought nearly 600 alternative-fuel vehicles for CZK 200 mil. since 2017. Another CZK billion from the programmes of the Ministry of Transport goes towards building the filling and recharging infrastructure (incl. hydrogen) throughout the country. In Prague, a call from the OP Prague Growth Pole will be announced in 2019 for the purchase of alternative-fuel cars and construction of charging stations, with an allocation of CZK half a billion. By 2020, the Czech Republic should have 1300 charging points, which is a goal that the government has set in the National Action Plan on Clean Mobility. Development of alternative transport includes, for example, the development of bike-sharing that is supported by the MoE from its grant resources. By the end of 2019, urban bike-sharing systems will be established in Liberec, Plzeň, České Budějovice and Prague.

Since 2015, the Ministry of Environment has heavily invested in replacement of obsolete solid fuel boilers through the so-called boiler subsidies[3]. MoE has invested in them almost CZK 6.3 billion from European funds since 2015. Regional authorities have received over 65,000 applications for replacement of boilers under those schemes. At least another 30,000 replacements are expected in the coming years. The last wave of the boiler subsidies for the Regions, again with an allocation of CZK 3 billion, will be launched early next year. The grant to replace the heat source can now reach up to CZK 127,500 per household.

Other replacements of heat sources are funded from the New Green Savings programme, which can even replace an old stove with a new source. Grants reach up to CZK 60,000[4].

Pilot project in the Moravian-Silesian Region

In the Moravian-Silesian Region, the MoE together with the State Environmental Fund will launch a pilot programme of interest-free loans for the purchase of boilers. "We want to help low-income population groups which do not have savings. The State Fund will lend them funds to top up the price of the boiler, which is not covered by the boiler subsidy. Also, we will finance specialists at the municipal authorities, who will help people with the replacements and paperwork regarding loans and boiler subsidies. If the programme proves successful, we can extend it to other Regions, particularly to the Ústí nad Labem and Karlovy Vary Regions that are doing worse economically than the other Regions," Minister Brabec explains.

During the two days of the meeting, the issue of introducing a carbon tax was recurring. "That's a thing that would affect hundreds of thousands of households and specifically those that are socially the weakest. Currently we are waiting for an analysis of the impacts of introducing the carbon tax, commissioned by the Ministry of Finance based on previous government-approved strategic documents (e.g. the State Energy Policy), and only then it will be possible to assess whether such a thing is realistic at all and mainly effective and under what conditions so that it does not hit hard on the weakest social groups. Logically, we place emphasis on a thorough impact analysis before we can propose any solutions," said Richard Brabec.

The discussion under the so-called Clean Air Dialogue of course included other sectors which generate emissions harmful to the atmosphere. Whether it is the industrial sector which is expected to further reduce emissions in line with the new European limits after 2020, or the agricultural sector which also has affordable potential to reduce emissions.

[1] The Clean Air Dialogue is one of the activities of the European Commission, whose aim is to help European countries in addressing air pollution. The Czech Republic is the sixth country where the CAD takes place - from 2017, when the first debate was held.

[2] Air pollution is emission which has come into contact with the environment, the concentration of a pollutant contained in the air is called the limit value and is thus an indicator of air quality.