Daniel Calleja of the European Commission in Prague: presented the Czech Republic country report on implementation of EU environmental legislation 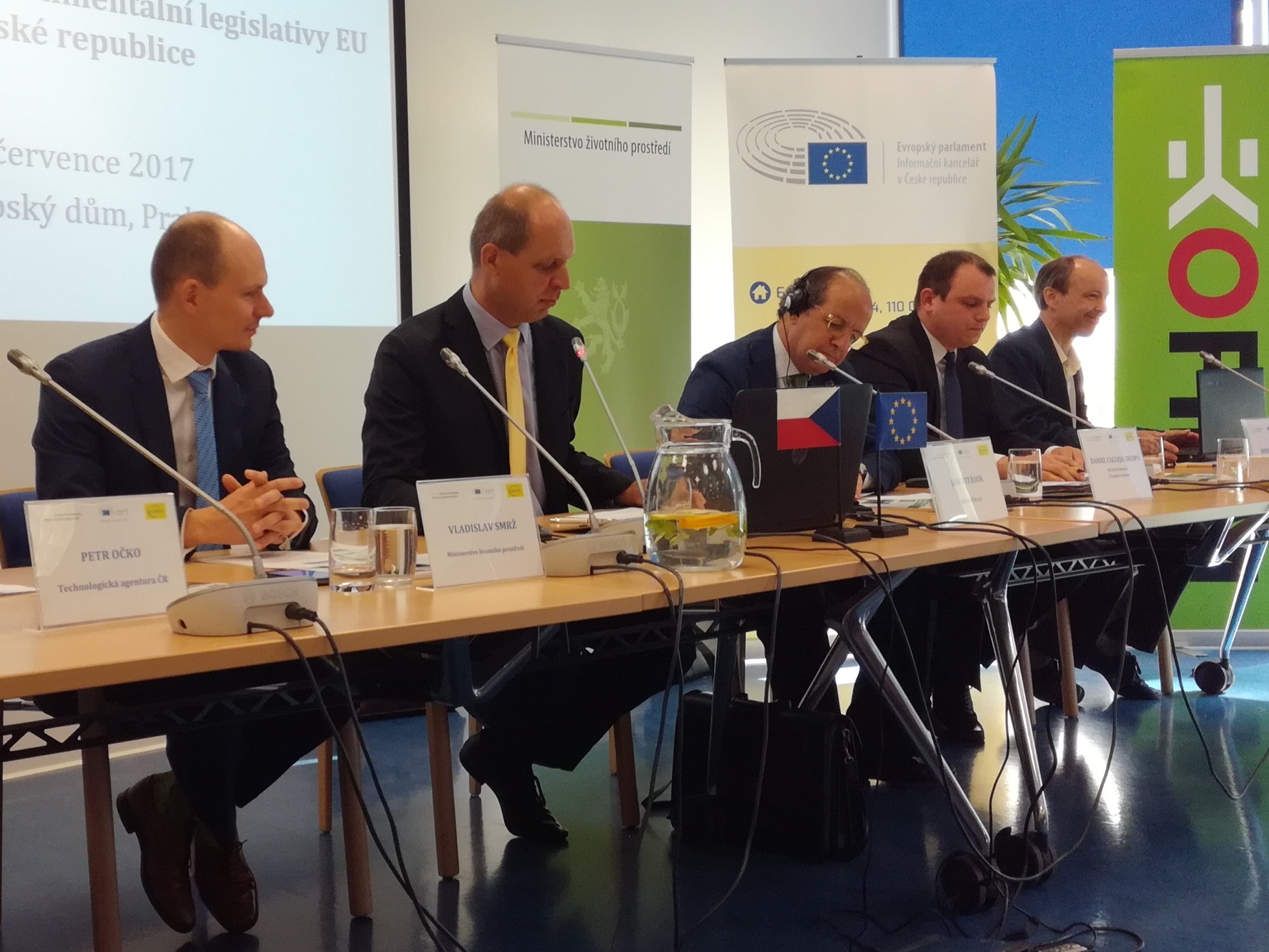 The European House in Prague today hosted a national dialogue on the implementation of EU environmental legislation. Country reports on that theme were published by the European Commission for each EU country in February this year. The meeting of representatives of the state administration, industry and non-governmental organizations was also attended by Director- General for the Environment (DG ENV) Daniel Calleja y Crespo. The main topics were especially air quality, waste management or the process of environmental impacts assessment.

The EIR country reports [1] on how EU countries apply and implement European law in their legal systems are a new initiative of the European Commission. The aim is to improve the implementation of European legislation on environmental protection in the individual EU member states. Every two years, the Commission will assess the situation in each country, and subsequently recommend improvements for the identified gaps. On 6 February this year, the European Commission published the first assessment of all member countries. "In my opinion, this evaluation can be especially beneficial as an exchange of experience and good practice among Member States and also help to raise awareness of issues relating to the environment," says Deputy Environment Minister Vladislav Smrž, who spoke at the start of the seminar.

"Furthermore, I believe that the findings of the EIR can serve as a useful feedback for policy makers at EU level, especially in cases where the results of the review pointed to weaknesses in the implementation in most EU Member States. In general, the causes of problems with the implementation of European law should be analysed, since they may not always be a fault on the part of the Member State," Deputy Smrž emphasizes.

The report for the Czech Republic as well as the new initiative as such was presented in Prague at a professional seminar directly by Director General of DG ENV, Daniel Calleja y Crespo. In his speech on the first assessment of the Czech Republic, he particularly appreciated the well functioning monitoring of habitats and endangered species, the functioning system of extended producer responsibility in the field of packaging and packaging waste and the activity of the Czech Republic in international negotiations (the convention on endangered species CITES). "Citizens across the EU consider environmental protection very important, in up to 95% according to the EC. EIR is a very useful and beneficial tool to help member countries to successfully implement and apply the EU rules in their national legal systems. Because in the EU there are many rules, but sometimes there is a problem with their correct implementation. For the Czech Republic, I see a challenge for the future in improvements of waste management towards strengthening the circular economy, as well as in the environmental impact assessment or air protection," says DG ENV Director-General, Daniel Calleja.

"As regards air quality, it's one of our top priorities. We have launched a boiler revolution in which we will distribute among citizens a total of CZK 9 billion on the replacement of old non eco-friendly boilers. We have approved an amendment to the Air Protection Act, which gives municipalities a powerful tool to enforce the law in cases where people burn poor quality fuel or even waste in the boilers and so pollute the air with toxic substances. In 2016, we released air quality improvement programmes for each of the regions in the Czech Republic, containing specific measures up to 2020 for industry, transport, agriculture, etc. Concerning the EIA, we have a transposing amendment to the relevant law in the Senate, which will substantially simplify and shorten the demanding process," Deputy Minister Smrž summarizes.

The publication of the reports should be followed by so called national dialogues in the Member States. The Czech Republic has organized the discussion meeting today in Prague as one of the first EU countries. The seminar "Protecting our future: Implementation of EU environmental legislation in the Czech Republic" was attended by key representatives of the stakeholder sectors, i.e. the state administration, industry or non-governmental organizations [2]. Presentations were made by Bohuslav Čížek from the Confederation of Industry of the Czech Republic, Daniel Vondrouš, Director of the Green Circle association, and Petr Očko, Chairman of the Technology Agency of the Czech Republic. Another part of the meeting focused on selected areas of the environment, i.e. on circular economy, air quality etc.

[2] The event was organized by the portal EurActiv.cz in cooperation with the Ministry of the Environment and the European Commission Representation in the Czech Republic.